Where no Sarah has ever gone before... 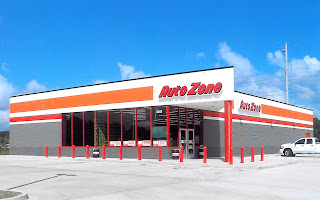 Yes, that's right. Today, I ventured into an AutoZone.

I sent a text to my little car-savvy cousin today to ask him if he would be a kind soul and change my oil when he got off work. I'd planned to take it somewhere this week, but I thought I'd save myself a little cash. He wrote back and said he would if I'd go and buy the necessary items. I said "sure" and asked him what those necessary items were, but he was at work and didn't respond right away.

I happened to be driving by an AutoZone right after this exchange took place, so I pulled in, determined to figure this out on my own. I grabbed my owner's manual and started to flip through it, but that book contains lots of words and diagrams, most of which I do not understand.

I then developed a second plan: go inside and head towards the oil aisle.

I've actually been in an AutoZone before, but I was there to interview the manager when I was playing journalism girl, and honestly, after looking around to see if any of the employees were hot, I didn't take in the rest of my surroundings.

Turns out, the whole place looks like "the oil aisle."

Some faceless individual from some other area of the store asked how I was, and I shouted back to them that I was fine, but they didn't offer any help. In an effort to look like I belonged, I took the owner's manual out of my purse and started flipping through it as I walked around. I swear to you every bottle in that store has the word "oil" on it. And it's all so orange. Like everything in the store is orange. And not a pretty pumpkin orange; it's more like a garish red-orange.

Finally, a very charming, nice-looking young man approached me and said, "Is there anything I can help you with?"

In an effort to keep this PG-13, I'll spare you what I was really thinking. Instead I blurted out, "My cousin told me he'd change my oil if I bought all of the supplies. Could you possibly tell me what those supplies might be called?"

Jen? There are other women in this store? Maybe I can ask her why everything is so orange, I thought. But then "Jen" appeared from behind some of those orange shelves and started typing on a computer. She didn't even look at me, and I'm not totally sure she was a she.

"What year is your car?"

"Ohhhh!" I put on a big smile and told her the year in my best fake, singsong voice.

She typed it in and then she glanced up at me. I smiled again, waiting for her to ask me something else.

"Well?" she asked after an awkward bit of silence.

I wanted to bark at him/her that I was not a mind-reader, but instead I told her what kind of car I drive.

"Um, uh, I..." I looked out at the parking lot, half hoping the car would send me some vibes because apparently, when it comes to car info, Jen don't play. I felt like I was back in school and some professor was asking me a question about some book that I hadn't even opened and didn't plan to because I could get a higher buy-back rate at the school bookstore. .

I looked around for the cute guy, but he had disappeared to help someone else. Finally, I pulled my owners manual back out of my purse. The answer wasn't on the cover, so I started to flip through it. I had no idea what I was looking for.

Jen continued to type, and I stared at her name-tag, wondering if Jen was short for, like I don't know, Jason or Jeffrey. Finally, she said, "Do you want the [something something something?] You get all that stuff up there for [some ridiculous price.]"  Seriously, I only caught every other word of whatever she was babbling on about.

I looked to where she was pointing. There were big cellophane-wrapped packages that looked like Easter baskets for mechanics. "How much is it again?" She repeated the crazy price that was more or less twice what I've ever paid to have my oil changed at a place that is not my cousin's house. "No, I just need to stick with the basics."

"Okay, do you want [some other special offer with some car-related words I didn't understand?]"

She pulled out a sales paper and pointed it all out to me, using pictures like I'd just rode in on a small yellow bus instead of my car.As I followed her fingers, I was thinking that it seemed like a lot of oil, but the price seemed okay after some very odd math I did in my head that included the sign at the gas station I'd just passed, divided by how much I generally pay to have my oil changed, times a little fact about oil that I remembered from a conversation that I'd had with my dad recently. Or something along those lines....

"Really? You will?" Grumpy Jen suddenly transformed into relieved Jen. Either she was happy to be nearing the end of our transaction, or AutoZone pays one hell of a commission. Then she asked, "Do you know what weight you need?"

I was just about to explain to Jen that I'd cut back on my low-carb eating plan this week, but I did plan to get right back to it after my trip to the mountains, so she could just mind her own business, when she sighed again and said "never mind" and started tapping on the keyboard.

"I'll just go right back there and get it all for you. But before I do, let me just tell you that you get $2 off a [such and such piece of car equipment thingy.]"

"I don't think I need that. But thanks."

"Are you sure? I'll just get you one anyway, and you can decide when you check out.  It's the time of year when..."

As she was gathering up all of these things, my cousin finally responded to my text. "You just need oil and a filter." And that was exactly what I had finally convinced my old pal Jen that I needed, so I was pretty proud of myself.

Until Jen came back with enough oil in her arms to solve some kind of national crisis. Mr. President, you say you can't fix gas prices, but I'm betting Jen at AutoZone can.

"That's what comes in the deal."

Fine, I thought. I've got several out-of-state trips planned over the next few months, so I'll just be able to change my oil multiple times. Never mind the fact that my standard rule of thumb is to change it every 15,000 miles or when my dad looks under my hood and starts screaming about when the last time I got my oil changed was - whichever comes first.

After another little struggle about whether or not I wanted that $2 off item, and some cockamamie story about how I really needed some, I want to say it was engine cleaner (um, yeah, the engine is on the inside; no one cares if it's clean, but I might pay you to come vacuum out the floorboards if you are that desperate...), Jen asks me one last stupid question.

"Do you have an AutoZone membership?"

Finally, I had had enough. I dropped my fake valley girl act and said as matter-of-factually as possible, "Jen, do you really think I have an AutoZone membership?" She started to explain to me what it was and why I needed one, but I cut her off. "Jen, I have never shopped in this store before, and if I play my cards right, I will never shop here again, so please, shut up about the damn membership, put my gazillion gallons of oil in a bag and let me go back to my car that is either an EX, LX, DX or SE."

Jen did as she was told, but not without a few haughty comments about car maintenance that meant absolutely nothing to me.

So, that was my trip to AutoZone. I'm sure it's a lovely place if you're into that kind of thing, but I prefer to pay people to do things like touch parts of my car that are not the door handle or steering wheel. Looks like I'm going to have to step up my bird diseases articles output. Or find a husband before I run out of all the oil I bought today.
Posted by Sarah at 00:30 No comments: