Last week, on the day I decided to keep the stray chickens, the animal situation at my house got a little weirder.

Around 2:00 that afternoon, I heard the chickens screeching like the world was coming to an end. I didn't go out there at first. They scream the same way if they see a bee buzzing around that they do when a coyote creeps into the yard and eats one of them.

But a few minutes later they did it again. I always take a nap on Tuesday afternoons, and I'd been asleep for a couple of hours, but I manged to drag myself out to the back porch to see if I could determine what was causing the commotion. That's when I spotted something white and furry creeping around the back of the coop.

Possum? Weasel? Are weasels white? Are there weasels in Georgia?

I put on my shoes and went out to investigate. What I found was not a weasel at all, but my little 8-month-old indoor kitten, Lily. I haven't introduced the kittens, Lily and Annie, here yet, because, well, they're cats. And I'm not a cat person. There's a whole story as to why I adopted them, but that's for another day. All I know is that they don't go outside, yet there was Lily, creeping around the chicken coop like a little white weasel.

She wouldn't let me catch her, but I managed to scare her back into the garage, shut the door, and shoo her back inside. She's sneaky like that.

A little while later, I had the chickens out for some free time, and once again, I hear them screeching. The dogs were on the back porch, and they were barking and growling. I glanced out the kitchen window, and it didn't take long to figure out what's wrong this time. There are two horses and four donkeys randomly wandering around the yard. 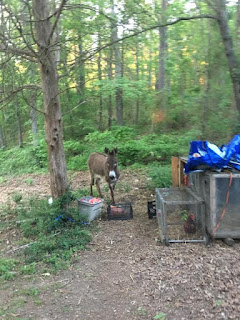 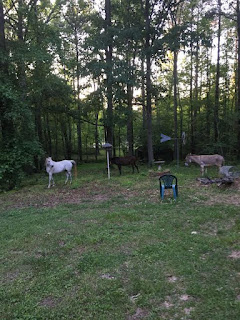 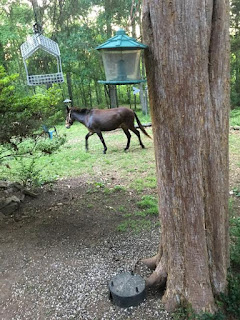 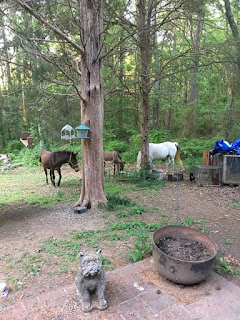 My chickens obviously don't know that they are farm animals, and these are farm animals and they should all get along, because they were having little hissy fits all over the patio. I was wearing a long dress, and some of them even tried to get up under it to hide.

Someone told me that the horses and donkeys heard I was keeping the chickens and decided to see if I'd keep them too. I can't say I wouldn't be open to it, but they actually have a home - they just don't like to stay there. As a matter of fact, they'd gotten out last weekend when a popular TV show filming next door to my house, and I'm pretty sure they disrupted that a little bit...at least that's what I gathered from all the braying and laughter I heard.

One of the horses actually ripped the hinges from my chicken coop door, so I'm going to have to make some repairs. As soon as I build the coop for Marigold and her new pals. Oh yes, Marigold and the new chickens get along fabulously. She lets them into her cage, and they all eat together peacefully. I'm so happy that she's no longer depressed and lonely that it's worth the $200 I spent on supplies and the fact that I'm going to have to build the new coop in 90-degree weather later this week.

Of course building a new coop is just one of the many things I have to do over the next few weeks. I just sat down the other day and made a to-do list, and by the time I was finished, I was too tired to mark anything off of it. Between work and home and animal projects, I should be pretty busy for a while. Next up, getting the pool cleared so I can jump in after I build the chicken coop in 90-degree weather. 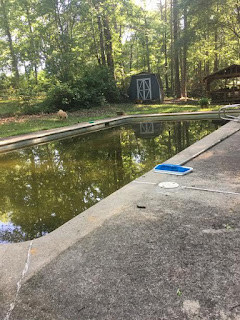 And so I can kick back on a float and start on my summer reading pile. If I have time. If I ever have time... 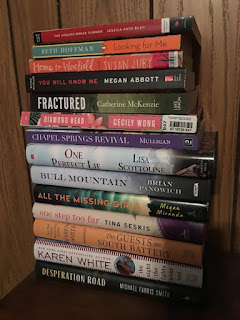