The hardest part of farming*... 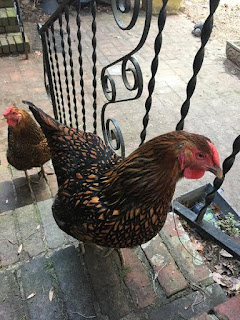 One of my biggest fears since getting my chickens when they were just a week old has been keeping them safe from predators. We basically live in the woods, and hawks, coyotes, foxes, neighborhood dogs, raccoons, owls, snakes and other creatures who wouldn't mind a delicious free-range chicken for supper are everywhere.

There have been a few near misses. Once, I was at the pool and looked up just in time to see a hawk flying down at them. Once, I walked up to pick them some kale from my mom's garden and came back to find them all curiously surrounding a stray boxer who appeared out of nowhere. The poor things are not afraid of dogs. Last summer I discovered a snake who was about 4-5 feet long in their house, but I think she was just looking for eggs.

Unfortunately, last week, one of those wild creatures was successful in plucking one of my girls from the yard.

The ladies have a nice big house and plans to move into a bigger one this year, and they get to have their freedom for a few hours each day. They put themselves up when it gets dark, and then I go feed them and shut them up for the night, but for some reason they've been lingering outside the door a little when it gets dark, soaking up every last bit of sun they can. I don't blame them. We've reached the part of winter where it's depressing for the sun to go down by 6 pm.

Anyway, last Thursday night, I'd stepped outside to put them up, but they weren't all in the house yet, so I decided to come back inside and get the dogs' food ready while the chickens lingered. The dogs were outside, and I'd just been out there making plenty of noise. I was actually sitting just inside the door in plain view of the coop. There was no way something would grab one of them with all this going on.

Suddenly, I heard one of the chickens scream. If you've ever had chickens, you know they scream about pretty much anything out of the ordinary. But when I got outside, the dogs were chasing something into the woods, and I only counted five hens instead of six. I searched the yard and edge of the woods as best as I could in the dark, hoping she was just hiding. I got up the next morning and saw no signs of a struggle — no blood or feathers. She was gone.

So, now I'm down to five. To be honest, I'm not sure which chicken is missing, because three of them look just alike — my golden-laced wyandottes — and I have to see them all outside together to tell you which is which, based on size and personality. Rose is tiny yet outgoing, Myrtle is a big lazy gal who hangs out with Marigold (the head hen), and Iris is skittish, keeps to herself, and barely leaves the area by the chicken house.

I'll know which one it was for sure in the next few days when I return them to short periods of ultra-supervised free-range time. In the meantime, I kind of feel like I let her down. I've decided the culprit was most likely a fox, coyote, or stray dog, but what kind of animal has the nerve to approach with humans and other dogs around? I wonder if she died quickly or suffered in pain for a while. I wonder if the other chickens miss her?

When I first put them into their new home, I decided I'd much rather them have their freedom, even if there's a risk, than to spend their lives in a cage and never get to experience digging in the mud for worms and scratching in the leaves and all the things they love to do. And I stand by that idea, but it doesn't make it any easier. Their new digs should provide a larger fenced-in area for that, and believe me, I've read every article online about how to make it predator proof. But given the circumstances of what happened last week, I've decided there's no way to completely protect them from harm unless you keep them inside your home. That doesn't mean I won't try, but it's one of the harsh realities of owning livestock, I guess.

*I realize I am not an actual farmer because I've raised half a dozen chickens and grew some tomatoes last year, but I don't let that stop me from pretending.
Posted by Sarah at 19:11 No comments:

Yes, I'm on the Falcons bandwagon and proud of it!

If you live in the state of Georgia, even if you aren't a football fan, you probably know the Atlanta Falcons are headed to the Super Bowl today. The city is electric with excitement. Schools and employers are encouraging kids and adults to wear their jerseys and team colors. The local media has a new angle on the event every few hours. Businesses are offering related sales and deals. Digital signs across town offer encouraging messages to players and fans. I could go on.

Heck, just making the playoffs was a big deal for the locals. A friend and long-time season ticket holder who was at the Georgia Dome for those games said the atmosphere was unlike anything he has ever experienced. On the day of the divisional game when the Falcons beat the Seahawks, I went to pick up some football food at a local wing place, and everyone I encountered, from the middle aged moms to the teenage delivery guys, was talking football. People in the parking lot, people who were obviously from different walks of life, were patting each other on the back and making comments about how the Falcons would "Rise Up" and how they had to watch Richard Sherman. There was a sense of unity I haven't experienced since the days that followed September 11.  That alone makes me love this sport.

You see, the Falcons don’t do this sort of thing often. The last time and only other time they were in the Super Bowl, I was in high school. And forget Super Bowls. The Falcons haven't had tons of great seasons period. Throw in the fact that they will be playing the team that approximately 99% of America loves to hate, and suddenly, they are everyone's favorite.

So, what do I think about all this? Honestly, I'm a little excited. Call me a bandwagon fan if you want, and that's probably a pretty accurate description, but I'm having a hard time staying off of it. Once upon a time, I was a big fan. I went to games. I joked to anyone who would listen that Jamal Anderson was my cousin. I went to autograph signings and Falcons parties hosted by local radio stations. I have all sorts of memorabilia packed away somewhere.

But then some things happened that I didn't like. A lot of that had to do with Michael Vick. I was never a fan, even before all the dog-fighting stuff. He was constantly in trouble before that, and I felt like the team deserved better. I even met him once at a music video shoot and was less than impressed.  I also hated some of the moves the team made in order to draft him. I felt like Matt Schaub deserved a better chance during those years or that the powers that be could have drafted someone (or several someones) even better for that amount of money. It didn't help that a young man named Peyton Manning, a guy I'd been madly obsessed with since he was in high school, had also reached the NFL and I could cheer for him properly without offending any of my fellow Georgia fans by singing "Rocky Top" occasionally.

And so, I became a Colts fan. I only attended Falcons games when the Colts were in town. I wore Colts hats and cheered them on to the playoffs and Super Bowls and lost myself in a haze of Peyton Manning glory. And then in 2012, I became a Broncos fan. I'd always liked John Elway, and some of my Georgia guys, like Champ Bailey and Knowshon Moreno, were there, so it was a perfect fit. The only time I thought about the Falcons was when I was playing fantasy football and needed a kicker. Matt Bryant's been pretty good to me.

But as it happened, Peyton — I'm pretty sure I can call him that — was most likely going to retire last year after he won the Super Bowl, and I began to panic. I decided I'd audition new teams to be my favorite. I was leaning towards Carolina because I do a lot of work for people in Charlotte, it's close, and I was becoming a big fan of Cam Newton off the field. But then they did some great things, and I felt like the worst kind of bandwagon fan of a team that already has quite a few of them. I briefly considered following Georgia's own Todd Gurley to the Rams, but let's face it: You can send the Rams to Hollywood, but they are still the Rams.

So, all year I've been a bit homeless. I thought of pulling for multiple teams. If Peyton's pizza commercials with the mascots for both the Broncos and Colts are to be believed, there's no shame in that. I knew who I wouldn't pull for: the Patriots, Seahawks, and Steelers in that order. They are all the worst, mostly because of the havoc they've wreaked on my Peyton — okay, the "my" might be stretching it a bit —over the years. I continued to cheer on the Broncos this year for as long as you could do so with any dignity, and by default I always pulled for the Giants. Hey, at least they have a Manning. But then something crazy happened. Falcons' games became something worth watching. Before I knew it I was getting excited about Matt Ryan, Julio, and Devonta. And Sanu, Coleman, and Beasley. I mean they even had Matt Schaub back.

After years of shunning them, I found myself secretly wanting them to win. I wanted them to get into the playoffs. I wanted them to show cities with rabid sports fans, like Boston and New York, that Atlanta can be great, too. And if the city's reaction to it all is any indication, I'm not alone. So, call me a bandwagon fan if you must. I'm willing to admit that I sort of fall into that category. And unless Peyton gets all Brett Favre-like and comes out of retirement, I'm probably going to stick around this time. Even throughout the seasons when the guys don't beat the Patriots in the Super Bowl. Yeah, it's so gonna happen.