So, it's May 14, and I haven't left the house in exactly two months. Well, that's not true. I've been to a plant nursery twice, though it's mostly outdoors, and I wore a mask. I've been to a pharmacy drive-thru a few times, and sometime around day 39, I started going back to Chick-fil-A, though drive-thru only. Apparently, that's how long I can last without Chick-fil-A. And I have to drop my mom off for medical treatments a few times a week, though I don't go inside there either. I've been to a neighbor's house, though they weren't home, and I dropped some things off at my cousin's house, but I didn't go inside, and I bought some eggs from another neighbor's farm store, but they use an honor system, so there was no human interaction.

That's what my version of what quarantine looks like.

And I have to confess, I don't absolutely hate it. The older I've gotten, the more I enjoy my own personal time at home. I'd prefer to be here about 80% of the time. 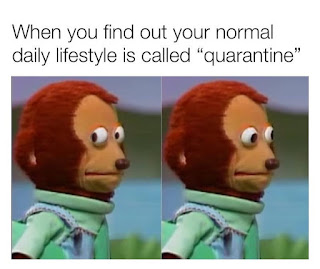 Over the last couple of years, both of my parents have dealt with some major health issues, and that's kind of left me at their beck and call. Running around doing their errands, spending endless nights in hospitals or driving back and forth to hospitals, buying groceries, taking them appointments...all I wanted was a stretch of time where I could stay home and just do some things I needed/wanted to do.  I was burnt out on errands and running and go go going. I've fantasized about just staying home for a month with no responsibilities.

And boy, did I get it. Sort of. I didn't want it this way, and I wish I'd been more prepared, but it is what it is. I'm finally getting into the groove of getting some of those things I've always wanted to  do accomplished, but it took a while. The rest of this will probably read like a quarantine diary for my own benefit, so it might get boring. But it's been a surreal time, and I felt like I needed to capture it somehow.

For me, it all started in January or February. With my dad home from work after a battle with sepsis, followed by open heart surgery, I get to hear about news stories I otherwise try to ignore. He watches a ton of TV these days. (I don't watch it at all and haven't since 2016, a big change for someone who used to be a political/news writer.) But that's the first thing I'd probably change about quarantine — you may or may not know that I've been living with my parents for a few years through no fault of my own. Every time I try to buy a house, something falls through or someone gets sick or injured and I have to put it off a little longer. The three of us suddenly home together 24/7 isn't ideal. Thankfully, there are plenty of places around our property to escape each other's company, but if someone told me last year that a quarantine was a comin', I would have worked a little harder on fixing up the house next to them that I'm probably going to end up living in for a while.

So, yeah, my dad kept talking about this virus in China, and I didn't think much of it. I had all kinds of travel plans this year, and I didn't have time to worry about what was happening in China. By February, everyone was taking it a little more seriously, and honestly, all I was concerned with was whether or not it would affect my trip to Turks & Caicos. I got sick in late February with what I'm convinced was possibly the coronavirus/Covid-19/reason for quarantine, and shortly after I recovered, my mom decided we needed to run to the store to stock up on groceries and supplies. I dropped her at one store and I went to another. We may have mocked her a little, but I'm the only person I know that hasn't had to scavenge for toilet paper.

Fast forward to Wednesday, March 11. Shit was getting real. My dad had a doctor's appointment at a hospital about 45 minutes away. We decided it was best for my mom not to go and expose herself and for us to carry a bottle of hand sanitizer into the office with us. When we arrived, nurses greeted us as the door, taking our temperatures and asking us questions about whether or not we'd been out of the country, how we felt, etc. That was the moment when I knew we better take this seriously. My dad talked to his cardiologist about it, and he seemed worried. We drove home with a different mindset than we had on the way there. By that evening, we found out the first known person to die from the virus in Georgia had been at that very hospital where we'd gone for the appointment. The next night, I think, the president canceled travel to Europe. The day after that, they shut down the schools. By Saturday, my cousin called me and told me there was hardly any food left at the grocery store.

My mom has a lot of allergy and breathing issues, and she was in need of some over-the-counter medicine. My cousin reported that a Dollar General in a not-so-great part of town was fairly empty, so, I put on my mask and gloves and headed over there. It was a little more crowded than normal, and some of the food shelves were empty. They didn't have the medicine I needed, but they did have a few snacks I decided I had to have just in case. I mean, sure, I'd been busting my butt to get into shape for that Turks & Caicos trip — not a carb in sight in my pantry or fridge — but much like I do when there's the possibility of a an inch of snow or a hurricane that'll likely weaken to a tropical storm by the time it reaches me, I decided I needed candy and junk. Spoiler alert: I still have that mentality two months later. Just ask my wardrobe.

Anyway, this trip to the Dollar Store was memorable because an old man made some rude comments towards me for wearing a mask. Something about how "they" said you don't need it and you're wasting medical supplies. I held my cool...and his wife whisked him away before I could smart off. I paid for my junk food and headed to Walgreens, which was actually less crowded. I saw a few other people wearing masks, and one girl was sitting in an aisle, FaceTiming her mom. She was so upset about toilet paper and certain foods. It was a little surreal, but Walgreens had the meds. And they also had tons of these little breakfast cookies my dad eats, and they had more quarantine snacks for me, so I made my way to the counter with a mountain of stuff in my arms. That was my last real life interaction with another person beyond my parents for a while.

So, another thing I need to admit here is that this whole situation hasn't affected my job too much. I already work at home. Most of what I write these days is more digital marketing than creative stuff or politics and news. As all of these companies were shutting down and moving their business online, I knew I'd be okay unless we just entered some sort of depression. As a matter of fact, my working from home was born out of the recession of 2009. I have a few friends who lost jobs or were furloughed. Most of the people I know were simply asked to work at home. Others have essential jobs, whether they work in hospitals or grocery stores.

Anyway, for the first couple of weeks, I had so much work, so I wad largely distracted from the rest of the world. Lots of people I know confessed to being scared or depressed, and I, the queen of needless anxiety, hadn't really felt any of that yet. Other friends seemed like they were on spring break and were binge-watching every show on Netflix and making their way through their TBR piles and beating all the video games. I was jealous. Finally, my work wrapped up for a bit. I tried to jump into spring break mode, but it just wasn't happening. I couldn't even listen to my favorite podcast, Tell 'em Steve-Dave, which has become a bit of a comfort blanket for me through all of my parents' medical issues over the last few years.

My friend Pat and I talked about this a little bit and she posted some articles on it. I found it difficult to concentrate on reading or writing or doing much of anything but watching the news, scrolling through Facebook (the meme game has been strong during all of this) and not really knowing how I spent my days. It hit me that the last time I felt like this was when my grandfather died a few years ago. It took me a while after that to have the ability to concentrate on much of anything. I guess we were all sort of mourning our formal lives during those first few weeks. Maybe some still are.

I busied myself with work around the house instead. I started opening the pool and cut grass. Finally, one night, I decided to find a random show on Netflix and just started watching it. What I chose was Reign, a CW version of the life of Mary, Queen of Scots. I've been on a European history kick lately, and it was the perfect blend of that and escapism (it's the CW after all — and there are plenty of cute boys in it). I watched all 78 episodes in less than three weeks. I'll always be grateful for that show.

In the meantime, I listened to my mother whine about how she wouldn't be able to plant a garden this year, because we couldn't go buy plants and most places are sold out online. So, I made it my mission to get her a garden together. Somehow, we've ended up with 72 tomato plants. Oops.

Running errands has been replaced with orders beyond orders. I can't even keep up anymore with what I have coming from Amazon and Home Depot and Chewy and Target and Sephora and all the other places I shop. We also order groceries once a week from Publix. I've ordered meat from Omaha Steaks and a local farm here in Georgia where I usually get my beef anyway. And I realize I could technically go to some of these places, as they never closed, but first, my parents are both medically fragile and I can't put them at risk. Second, see my above statement about not wanting to go go go all the time. I've thoroughly enjoyed living in loungewear for two months thank you very much.

Although, I am starting to get the urge to go to stores again, so maybe I'm healed of my desire to stay home. Maybe not. Anyway, it's getting late — I'm going to wrap this up here and save the rest of my quarantine diary for another post.