I read Matthew Perry's memoir, and here's why I think you should too. 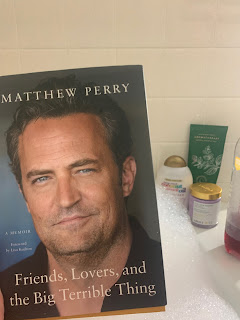 So, I'm terrible at book reviews, but I knew I'd want to write something about this one. And this may be the first "celebrity memoir" I've ever read. Unless your best work in TV and film was completed before 1990, I just don't really care enough to read your life story. Give me Clark Gable. Give me Robert Duvall. Give me Bill Murray. Matthew Perry is one of few exceptions to that rule, but I'll get to that in a minute.

Also, I don't like the idea of labeling this a "celebrity memoir."

It's much more than that.

It's a human story written by someone who just happens to have experienced celebrity.

You don't have to be a Friends fan to appreciate Friends, Lovers, and the Big Terrible Thing. You don't even have to be a Matthew Perry fan. (But if you are both or either of those things, you'll probably enjoy it.) You don't have to be someone with an addiction to relate to it. There's a lot of other life stuff too. (I mean, I felt the passages about loneliness could have been written by me recently — see: Experiences Over Everything). But if you do struggle with addiction, there's a great deal in this book that you might relate to too. It may even encourage or help you. He is quite knowledgeable on the topic.

There was a lot of press that came out before the book did, and if you just glanced at those headlines, you might think that this would be the print version of Joe Walsh's "Life's Been Good."

Yes, there are stories about people whose names you see in magazines that might delight you if you're into that kind of thing, but there are also great stories about people who aren't. My personal favorites were about actor David Pressman. As a matter of fact, the first line I read when I initially received the book and was skimming through is "I once made out with David Pressman…" I've been following Pressman on Twitter for years and just think he's the funniest person on the planet, and every time I see him on TV, I scream, sometimes to no one, "Oh my God, there's David Pressman" because I'm a bit of a dork like that.

The book is pretty raw and intense at times. At times, it's Perry's opportunity to tell his side of a story that the media created about him over the last couple of decades. You learn which bits are true and which aren't and which were actually way worse than what you thought you knew. But I don't get the feeling that this was written as some kind of defensive play against the media.

Brave. I read most of this book while sitting through a few bubble baths, and even so, I found myself reaching for my phone and taking notes as I read, and I typed the word "brave" about six or seven times. It had to be tough to write about some of these topics. There were times when I wanted to crawl into the book and give the author a hug. But I don't get the feeling that he wrote this hoping to get everyone to feel bad for him. It's not a pity party at all.

It's just so many things rolled into one, but I guess in a way, it's an introduction to Matthew Perry the person. I suppose that's what a memoir is, but you get to know him on a human level here. You learn that he's not just an actor, not just someone who deals with addiction, and not just that famous funny guy on TV. He's a real person who seems like a loyal and loving friend (lowercase F) and son and brother. He comes across as someone who is clever, thoughtful, and intelligent, but as someone who has fears and anxiety like the rest of us. To me, that was the best part of the book — getting to know this guy who was such a huge part of pop culture while I was growing up.

The content aside, there are some beautifully-written passages peppered throughout the book that made me envious as a professional writer. And there are some that just literally had me giggling out loud right there in my bubble bath. This guy can tell an engaging story and make you laugh and cry, sometimes on the same page, and I hope this is just the beginning. More memoirs, fiction…acrostic poetry? Whatever it is, with any luck, a decade from now, I'll have several books written by Matthew Perry in my library and you will too.

And that's exactly why I read this book. It's why I pre-ordered it over the summer. I've just always gotten that vibe that this guy could write a story that you'd want to read. And I was correct. And that's why Matthew Perry is probably one of the few actors who has found success in my lifetime whose memoir I'm willing to bring into my sacred bubble bath world. (There is no sacred bubble bath world. I just made that up.)

So, about that… Let me start by saying I may be the only person on the planet who didn't become a Perry fan because of Friends necessarily. I really didn't even watch the show when it initially aired. I was in...middle school? at the time, and some girls who weren't so nice to me were obsessed with it, and they thought Chandler was the cute one. So, I decided that A) I was not ever going to watch it and B) Ross was the cute one. And that was that.

But a few years later, sometime in the early 2000s, I was in Los Angeles for professional reasons, and though I was still a teenager at the time, the person I was working for asked me to chaperone this 28-year-old Australian lady to the La Brea Tar Pits. All I remember about that outing was that the Aussie had never seen a squirrel before, she had just broken up with her boyfriend and talked at length about it, and for some weird reason, she wanted to see the spot where Matthew Perry had been in a headline-making car accident.

I was going to have to look the no-squirrels-in-Australia thing up, and I was way too young to offer relationship advice to a woman who was nearly 30, so when we rode along some random road in the Hollywood Hills, I was all, "I don't know where it was exactly, but I think the accident was on this street."

I had no idea what I was talking about. I was only even vaguely aware that it had happened. I just didn't want this cool international lady to think I was dork. (Yes, I know. We've already established that I am.) And now, I feel really bad about that.

Sometime after that, I saw Perry on a talk show. And then in a movie. And then I guess I started watching the last couple of seasons of Friends with my mom when I was around to do so because I remember us watching the finale in her bedroom. And I can't pinpoint the exact moment or even the reason why I started paying attention to him — of course, he's handsome and charming and all the things that come with being a famous TV guy — but it just seemed like there was something interesting about him. Something more than what you saw on TV.

I followed his career for a while as best I could, but there are still several movies and shows I haven't seen. I am still in love with Studio 60 on the Sunset Strip and watch it like once a year, and there are a few independent movies he's in that I think are some of his best performances. I actually tend to really like his darker or more dramatic work. And, of course, I've now seen all episodes of Friends.

I'm rambling at this point, and if you made it this far, thank you. I didn't even get to all the notes I made on my phone or the passages I marked, but I don't think I need to. It's a good read that covers a multitude of topics — something for everyone. Go out and get it. It would definitely make a great Christmas gift. 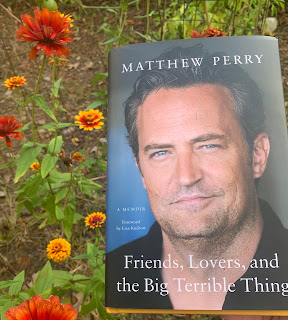 And if you didn't read my rambling, to sum it all up: I do think you should read this book. And I think Matthew Perry should write more of them.

Now, I have an SEC Championship to get to. Go Dawgs!