My mom's been dead for a year, and I have no zucchini 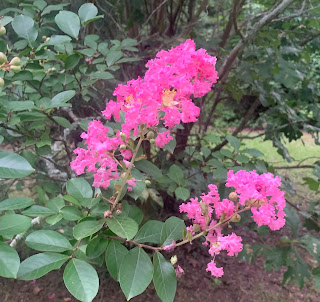 Back in May or June, I planted 16 zucchini seeds. It's one of my favorite vegetables, and I had great dreams of making zucchini bread and all sorts of delicious zucchini dishes through July, August, and Septemeber. Eight of those seeds sprouted, and seven of them thrived. For a bit. They each had dozens of blossoms, and I saw pollinators on them, and I even tried some hand pollinating. But eventually, the color began to fade, and I found squash bugs on them. My dad kept saying, "These plants just dont' look right," but I chose to ignore him. Although, it was hard to ignore him when they weren't actually producting anything.

I went from hoping for a sizable harvest to hoping for any harvest at all. And last Friday, I stepped outside to check on things when I got back into town after a few days away, and I couldn't believe my eyes: one beautiful green zucchini. The perfect shape and size and color. I waited a couple of days to pick it, and yes, that was a lot of work for one single squash, but I was pretty proud of it. And today, I was in the kitchen cooking some eggs and sausage for lunch when I spotted that zucchini in the fridge and decided I'd slice it up with my last Vidalia onion and cook that to go with my lunch. Fresh eggs and zucchini straight from the backyard. You can't beat that.

So, I got a knife, and I was slicing away, feeling like I had finally accomplished something, and big things were on the horizon. And I got about five slices in when I realized the dang thing was full of worms.

Anyway, yesterday was the first anniversary of my mom's death. I thought the day would be more of a downer, but it really seemed more like the opportunity to close the door on what has been a trying period of my life and start fresh. That moment with the zucchini felt pretty symbolic of the last few years. We went through a lot with my mom's health, and it seemed like every time we'd get to a positive place, something bad and totally out of the ordinary would happen. Even so, I continued making big plans to do this and that with my life, and the world made even bigger plans to stomp them out. My dad has always told me I should write a book on it, and I told him it's not a period I'd like to relive, but now that I have some distance, I do think it's pretty incredible that we made it through what we did.

While this hasn't been an easy year, even without my mom's health problems standing front and center, it has been an educational one. I've written a great deal about lessons I've learned. Finding out who in my life is and isn't reliable. Learning the hard way that putting work above everything else is a bad idea. Rediscovering my own interests when I'm not having to put someone else first 100% of the time. Learning that even the smallest things can seem difficult when so much of your support system is suddenly gone from your life.

But the most important thing I've learned is that I can handle it. Heck, just the last month alone was enough to nearly send anyone on a downward spiral. Last week, I spent some time in Savannah and Hilton Head, and by the time I got there, I was an absolute anxiety-filled mess. Thankfully, I have good friends who understood. But being away for a few days, spending time with people I'm not related to, and breathing in the salty air was healing. And coming home and saying goodbye to the last year was healing in a way too. As I said, yesterday felt like a fresh start. I have no idea what the future holds, but I think I'm a little better prepared to handle it than I was last year, and that feels really great.

I'll always miss my mom. I'll always wish she was here to do life with me, through the highs and lows. I hate that if I ever get married or have a kid she won't meet them. I hate that she's not here to see these beautiful flowers I've grown in my garden or that I did (what seems to be a successful) surgery on a chicken foot. I hate that she's not here to commiserate when I have to euthanize my cat or deal with someone who's being a jerk or postpone school a semester. There are days when I feel like I'm going to explode if I don't share some bit of information with someone, and I have to run through my list of people, and none of them seems like the right one to tell because my mom was the person I would have told. That's such a lonely, lonely feeling. And there are nights when things slow down and I get upstairs to my bedroom and just feel like someone punched me in the stomach when the reality hits that she's not here anymore. And I'm told that will always be the case. She'll always be a part of me. Just last week, something happened that made me realize she and I were a lot more alike than I ever thought. But there is so much more life for me to live, I hope, so I just have to pick up and keep going and start living more for myself now, and that's what I'm going to do. With any luck, she's watching and cheering me on.