I've planted many small gardens over the last decade or so, but this is the first year that I've had the majority of 8.5 acres to do exactly what I wanted (and implement some of my newly-learned UGA ag student knowledge), which means I got the opportunity to plant a much bigger variety of vegetables and flowers than I ever have before. Unfortunately, I didnt' get to do quite what I set out to, but I did get to conduct some experiments I've always wanted to try, and I learned some things along the way. Some of them were hits. Some of them were misses. And since my last few posts have been pretty deep or death-related, I figured I'd lighten the mood and write about those hits and misses.

Let's start with the good stuff. These are the items that were quite successful. 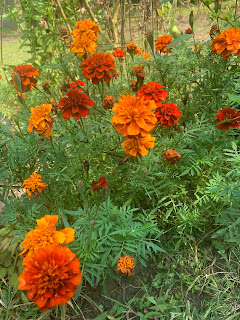 I love a deep red flower, and I've never seen a deep red marigold, so when I spotted these Fireball marigold seeds on the Park Seed website, I knew I had to have them. They sprouted quickly with a 100% germination rate after I planted them in May, and it's the first week of November, and they're still blooming just as much as they were two or three months ago, despite the fact that my ducks like to trample them.

I've really never had success with marigolds even though they're supposedly easy to grow, and now, I know why. I've always planted starts from a nursery rather than starting my own seeds. Starting seeds is the way to go. What's cool about these is that they start out red before turning various shades of orange, so as they bloom, you have a variety of shades going at once. Pictures don't even do them justice. Because of the 100% germination rate and my inability to get rid of unwanted seedlings, I actually ended up transplanting some of them, and even those thrived. 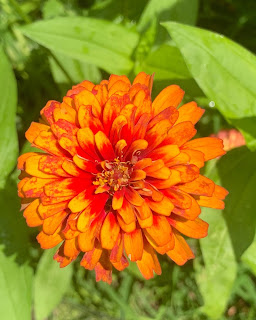 Zinnias are also supposed to be super easy to grow, but I've never really had much luck with them. They were one of my mom's favorite flowers, and I have fond memories of her growing them when I was little, but I hadn't really experienced them as an adult. And I actually have maybe 20 to 30 packets of zinnia seeds that sit untouched. Orange flowers aren't my favorite, but for some reason, I grabbed this pack of Macareina zinnias that I had ordered from Baker Creek last year and scattered them next to my tomatoes. I didn't expect much from them, but they were definitely the superstars of my garden this year. Even my dad who says he "doesn't really pay attention to flowers" has commented on them. The pollinators loved them too. 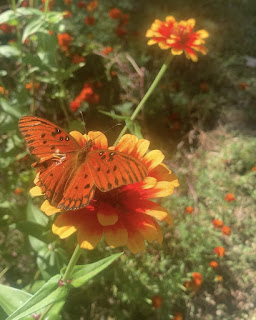 I'll definitely plant more of these next year. Like the marigolds, I planted them in May, and they're still blooming as much as they were all summer. As a matter of fact, once they got going, they bloomed quickly. Bees, butterflies, and hummingbirds love them. They grew to be much taller than I expected (three to five-foot plants), and they put out quite a variety of colors and shapes. 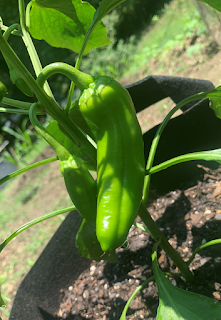 Anaheim chili peppers are, without a doubt, my favorite peppers. I add them to many things when I cook, but I usually use canned ones. A few years ago, I found a plant at a local nursery and brought it home and learned that fresh ones are much better than canned ones. Since then, I've tried every year to start some seeds myself. And every year, I've failed. Either they didn't come up, or I didn't have the time and attention to give them. This year, I started dozens of seeds, and almost every single one of them sprouted in time. I actually ended up with more plants than I had time to put into the ground, and more peppers than I knew what to do with. It's November, and the plants I did plant are still loaded. Next year, I'd like to experiment with more types of peppers, but I'll definitely plant more of these. 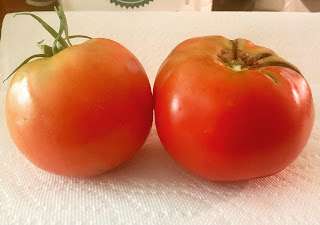 My biggest garden accomplishment this year was that it was the first time I successfully grew tomatoes from seed and saw them all the way through to production. I grew up in a gardening family, but my parents and grandfather always bought nursery starts when it came to tomatoes. We have a long growing season, and I wanted to experiment with some different types that you can't necessarily find here. One I've been toying with for a few years was the Wood's Famous Brimmer Tomatoes from Baker Creek. They're supposed to be the quintessential BLT tomato, and while I don't eat raw tomatoes myself, I still wanted to see just how impressive they were.

So, first, they're a Mid-Atlantic variety, and I didn't really think that through when I planted them. We had some ridiculously hot and humid days in late spring and early summer, and several of my newly-transferred tomato plants kicked the bucket due to the heat. But the ones I transferred before the sweltering heat kicked in thrived, and like everything else on this list, they're still producing in November. My dad has eaten plenty of them, and the rest go to the chickens. He says they're pretty tasty. I will say they are late producers. I didn't start getting red tomatoes until August or so, but if you want a tomato that will carrying you through the fall, this is it. Next year, I'll plant more of avariety, but I'll definitely have a few of these in the mix. 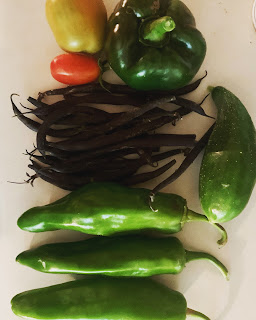 Last but not least are these Dwarf Velour French bush beans that I ordered from Park Seed on a whim. I had plans to plant a lot of green beans this summer. They're one of the few veggies both my dad and I like, and I had several varieties to try. Unfortunately, the chickens proved to be little garden destroyers, and planting something that would need as much space as pole beans was out of the question until I prepared a better spot. But in August, I went ahead and planted some of these bush beans in the garden space I could use, and they sprouted immediately and grew and flourished and were absolutely beautiful with their deep purple pods. I absolutely plan to plant more next year.

So, onto the stuff that didn't do too well. I've already talked about how my zucchini failed, so I won't rehash that, but here are a few others that I'm gonna have to do over next year. 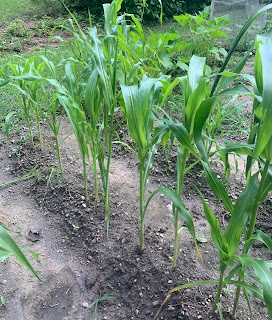 Let me start by saying I've never planted corn before, but I was excited to give it a try. I ended up trying this German corn from Baker Creek called Damaun KS Super Sweet Corn. The corn sprouted quickly. In a few weeks, it was a foot tall and as healthy can be. My dad fancies himself something of an expert at growing corn, and he kept it hilled up and aerated for me. The problem is that when this corn got to be about three feet tall, it went ahead and began tassling. And what ears I did get from it were super small and mostly underdeveloped. 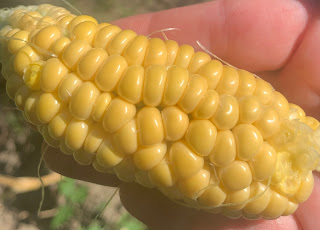 I don't necessarily blame the corn itself for this. First, I didn't prep the area where I planted it really well because, well, chickens. Also, I'm in a Atlanta gardening group on Facebook, and it sounds like many people didn't have much luck with corn this year. We had a summer of extremely hot weather and long stretches of drought followed by long stretches of rain. There was no in between. So, I'm thinking the corn was a bit stressed from the weather extremes, and I just didn't have the time to pay it the attention it needed. I'll try again next year, but there was no big corn harvest in 2022.

Cucamelons. Mouse melons. Mexican gherkins. Whatever you want to call them, these little fruits look like watermelons, supposedly taste like citrusy cucumbers, and they've become quite trendy. My mom and I both wanted to try them last year, and we never got around to that, but I was determined to try them this year if I got nothing else planted.

I really don't know what went wrong with these. They took forever to sprout. They started to grow, and then they just quit. And then a few months later, they started to grow again at random, and then they just quit. I have a theory. These things originate in Central and South America, so I assumed they just liked super hot conditions with full sun, and I planted them in such a space. My research shows that they may actually thrive with a little shade. I fully intend to replant them next year, but I'll probably put them somewhere else and give them a little more TLC than I did this year. 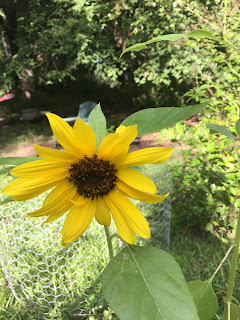 This is pretty generic, but I can't grow sunflowers to save my life. I tried planting several types. I'm pretty sure I replanted my sunflowers eight times throughout the course of the summer. Some of that was due to crafty little chickens digging up the seeds and eating them, but most of it was just due to the fact that they just would not grow. I planted old seeds and new. Different varieties. Nothing worked. Sometime around late July or August, I finally had exactly three of these Arikara sunflowers sprout and bloom. The problem is they're supposed to be 10 feet fall. Mine came up to about my waist. And I'm not 20 feet tall. The blooms were about the size of my palm. 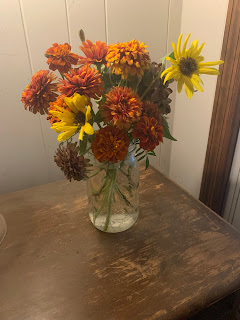 Thankfully, I had more hits than misses, and there was plenty of in between, like my cucumbers, roma tomatoes, dahlias, and banana peppers. And even the misses have been a great education in what not to do. Three things I know I need to do next year are:

1. Focus on my soil. My dad and grandfather abused the soil on this land, and I'm working on bringing it back to life through permaculture.

2. Fence off my garden spaces so the chickens can't get into them until they're established.

3. Prepare more during the winter. I spent last winter shut up in the house with my laptop working. I don't intend to do that this year.