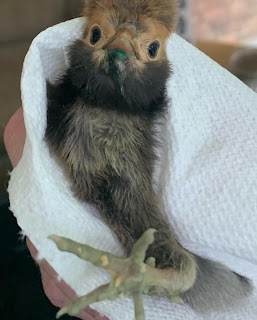 Despite having a ton of stuff to do today, I decided to go run errands instead. I really don't get out a lot lately, so when I'm in the mood, I figure I better take advantage of it, even if it's just to go buy chicken feed and toilet cleaner. Anyway, before I left, I put the ducks up and let the chickens out — a little early but that's our normal routine. My dad and I both check on them when they're out, and sometimes, we'll sit out and read or do yardwork.

So, about an hour and a half after I'd left, I had this weird feeling about the chickens and predators. It could have been the general anxiety I have about everything, or it could have been a premonition, who knows, but a few minutes later my dad called and said "Well, Butters is dead."

Oh, Butters. Let me tell you about Butters.

Back when I ordered my chicks from the hatchery, my mom said, "Why don't get some of those little ones with the feathers on their head? I love those." Polishes. She followed some people on Instagram and YouTube who had farms and raised them and just loved them. So, I did. Because at that time I was in the mode to do whatever I could to bring her a little bit of joy.

If you've never seen a Polish chicken, they're tiny little things with a big poof of feathers on top of their heads. They can't see to save their lives. I ordered a white one and a black one, but they were out of black ones, so they sent me two golden-laced ones instead. They were the color of peanut butter when they arrived, and before I had names for anyone, I would call them the Peanut Butters. Fast forward, and that's what I ended up naming them: Peanut and Butters. I also chose Butters because of the South Park character. Their personalities aligned.

So, my mom ended up with three Polish chicks that she never really got to enjoy, which means I ended up with three Polish chicks. After dealing with my mom's lengthy hospital stay and death, my dad helped me finally move all the chicks outside in September, and I noticed right away that something wasn't right with Butters. She laid down a lot, even to eat. She had absolutely no tail feathers. She stayed hovereing in a corner most of the time. The next day, I saw another chicken go after her and then I saw bloody spots, so I brought her back in the house.

Butters spent a couple of nights on the porch to rest and cover. I doctored her up with some stuff to prevent infection and gave her lots of protein. She perked up a bit and seemed really lonely, so we decided to take her back out and see how she'd do with the others. I sprayed some some stuff on her that will help keep the others from pecking at her, and I trimmed the feathers on her head, hoping it'd help her see a little better.

She was so happy to be back with the flock, and she required a little extra help in the weeks after that, but she really started to flourish after a while. Maybe a little too much. Butters became quite feisty and confident. If anyone pecked her, she pecked them right back. Her tail feathers grew back, and soon, she was bigger than Peanut who is kind of a weirdo too. Even so, she still seemed to have something not quite right going on with her. At first, we thought maybe she was actually blind, but then we started researching and decided it was possibly some kind of neurological thing. Either way, she was thriving, despite her disabilities, and everyone stopped picking on her for the most part. 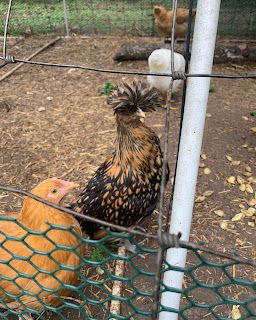 Butters was hesitant when I first started letting them out for free-range time. While everyone else roamed, she stuck close to the coop and run. To be honest, for a while, I debated keeping the Polishes in their own coop. They're not super compatible with free-range time because something can sneak up on them oh so easily. Even trimming their head feathers didn't do much to help with their sight. But I also made up my mind a few years ago when I first had chickens that I'd rather them have short happy lives than spend years cooped up, literally, in a cage. I'll do everything I can for them and anything that I believe is in their best interest, but at the end of the day, God and nature will decide. I did a ton of researching and soul searching, and this is just how I feel about the circle of the life. I think if you ever want to invest your money, time, or heart into livestock, unless you just want to keep a couple as little pets, it's important to decide what mentality about death you're willing to develop because it's an unavoidable part of it... but that's a post for another day.

Back around the end of November, my two roosters got into a bit of a squirmisth. Again, this is another post for another day, but this left my big guy, Rudy, a bit beat up and with some hurt feelings. He sat and moped under their coop for a couple of days, and Butters stayed by his side. For about a week, she followed him everywhere he went. Until recently, Rudy had been one of the lowest on the pecking order, even though he's a guy and easily two to three times as big as the rest of the chickens, and I think Butters understood that and knew he needed a friend. Then again, Butters loves having friends. Anytime she spotted one of the other chickens sprawled out in the sun, she'd run over and plop down beside them. She was just a social little lady who wanted to belong so badly.

Well, over the last week or two, Butters has become quite adventurous. She has a tendency to wander off on her own, but the other two Polishes do that too. I kind of think they don't realize they're doing it. Anyway, we did so much to help her build her confidence, and maybe we did a little too much because she thought she was invincible. Last night, she was halfway into the woods, and I told my dad as went over to herd her back, "That girl isn't long for this world."

I had no idea just how right I was. We're not entirely sure what happened, but it was most likely a hawk or an owl. I've never lost a chicken to an aerial predator. Foxes and coyotes, yes, but the local hawks have never been successful. What seems unusual is that only one of my other chickens seemed scared or acted like she knew something was amiss. We actually thought it had gotten her too until we found her hiding somewhere. The others were all business as usual, even my two roosters who are actually really great at keeping an eye out for predators. But, like I said, Butters liked to wander off by herself, and the boys and the other girls were probably off somewhere else when it happened.

My poor dad is having a hard time with it. Mr. "I don't care anything about farm animals" has become quite the farmhand over the last few months. With my mom gone, him retired and recovered from his health issues, COVID sticking around, and me working so much, he has taken over many of my animal duties. And Butters was his favorite little feathered friend. My chickens aren't crazy about being handled, but he had Butters trained so that he could just pick her up and hold her without much a fuss. He buried her, and I'm pretty sure he didn't eat supper tonight. I told him that my mom had wanted these Polish chickens, so maybe she's finally getting to spend time with one of them now.

So, that's the story of Butters — the mightly little chicken whose 7 months on this planet made quite an impression on my family. We'll probably cut out free range time for a little while, and when they do go back out, it will be mostly supervised. After this weekend, the weather is supposed to warm up a bit, it's about time for fox and coyote mating season, and that hawk or whatever it was will likely return. We'll figure out our balance again and move on. That's just what you have to do.