My goal for today was to get some exercise. I've been slacking lately and really just haven't had a ton of spare time, so I figured I'd make this Sunday all about fitness. I had a long list of workouts to do, which included a swim, some kickboxing, and some weight-lifting, but I wanted to start it all out by getting in as close to 10,000 steps as I possibly could before I did any of that.

Earlier this year, I discovered that cutting grass with a push mower is an excellent way to get those steps in and feel like a productive member of society at the same time. I'll throw on some music, plug in my earbuds, and push that mower across any yard in town if I have to. Seriously, if you live in the Atlanta area and need your grass cut, give me a call!

So, on this particular Sunday afternoon, when it's 90+ degrees in mid-July in Georgia, with 90 percent humidity and absolutely miserable, I decided I'd cut some grass in front of my parents' house. There's this long grassy embankment, about three to four feet tall, that covers most of the front of their property. My parents typically use a riding mower to cut their grass, but this area is too steep for that. It's a pain to mow, but I decided I'd tackle it. Not only would I get my steps in, but all that climbing up and down that hill, pushing and pulling that mower would most certainly lead to a nice Kim Kardashian butt when I finished for sure.

I worked for about half an hour on it, but I can't lie; it was grueling. Sweat poured off of me, my feet hurt in my cheap Old Navy flip-flops, and the air was so thick I could barely breathe. I went inside for a drink of water and a quick break halfway through the job. It was tempting to stay in, but I only had like 1,500 steps (in my head, I had 8,000) and I'm no wimp. So, I went back outside, determined to finish cutting this little strip of land and earn myself that Kardashian-like body part.

I powered through until I had a space that was about 3 x 3 feet left. The light at the end of the tunnel. And believe me, I was so hot and tired and delirious, I was seeing lights and tunnels and all sorts of other things that weren't actually there. But just as I started to push the mower towards that strip, I felt a sharp pain in my left thigh. And then another. And another. I thought I was having a stroke or something.

All of these searing pains were happening on the same side and seemingly inside my clothes. I was wearing skintight capri leggings, so it's not like anything could just slide down in there without me noticing it. I just knew this was how I was going to go out. Cutting the damn grass.

But then I felt the same sharp, stinging pains on my right side. And down my shirt, in my bra, on my ankles, on my fingers, on my arms, on my calves...  My first thought was that I'd hit an ant bed, but I've been bitten by plenty of ants and none of them felt this severe, nor did they have time to climb up in my bra in such a short period of time.

I guess I'm not the sharpest tool in the shed, because it took a minute for me to realize there were hundreds of angry yellow jackets swarming around me, and it took another minute for me to realize that this is what was causing this searing pain all over my body. Suddenly, I was dancing all over the yard, swatting at the little jerks and screaming every curse word I've ever learned in my life. Thankfully, I'm related to the only close neighbors, and they're used to me doing strange things.

On the bright side, it made me realize there are only 46 days until the college football season starts. Hey, it's July, and I've been without football for months, so if being stung by the mascot of my college team's rival team makes me think about football, even through some of the most awful pain I've been in in a while, then so be it. Go Dawgs! 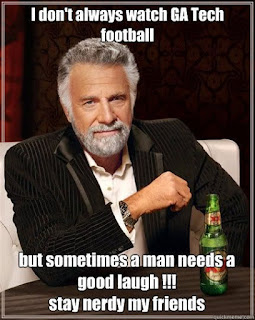