I've had chickens on and off since 2015, and in that timeframe, I've done tons of research, learned so much through trial and error, and have even taken some poultry classes at UGA, but up until this last year when I got my current flock, I'd never heard of bumblefoot.

It's pretty common in chickens, so I'm not sure how it's slipped past me. And the from the moment I learned about it, I thought it sounded pretty gruesome and hoped it was something I would never encounter. So, naturally, that meant that I would have a chicken develop it ASAP.

What is bumblefoot you ask? It's basically a staph infection. A chicken gets a cut or scrape on its foot, and bacteria gets inside and creates an infection. The only real cure for it is to remove the infection, which can present like a stringy cheesy material or a hard kernal of corn. I know, I know. That sounds as disgusting to me as it does to you. But you can read more details about bumblefoot at PoultryDVM.com if you like.

So, about a month or so ago, I noticed one of my Jersey Giants, Venus, limping a bit. She'd gotten into a litle squirmish with one of my Cochins, who can be a bit of a jerk, and I just assumed she'd sprained something. It happens. I don't intervene with a chicken who is limping unless they're unable to move around much or it's obviously causing severe pain or there is something visibly wrong, like a wound or something stuck in the foot. This seemed minor, so I figured it'd heal up within a few days. And within a week or so, she was walking normally, so I thoght nothing else about it.

But a couple of weekends ago, I noticed Venus limping again. I kept an eye on her for a day or two, but it seemed to get worse, and after a couple of days, she was hovering near the coop during free time, standing on foot when she could, and wincing anytime she had to jump or climb up on something. She's normally quite active and loves to explore, so I knew something was up. I caught her, looked at her foot, and I knew right away from everything I'd read and the pictures I'd seen that she had a textbook case of bumblefoot. 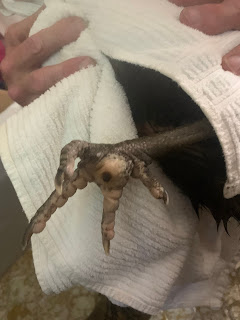 Treatment for bumblefoot can vary from case to case, but most people start with Epsom salt soaks. Some use drawing salve. Some try to remove the scab and dig out the infection, and others just slice right into the foot with a scalpel and take it out. We fell somewhere in the middle. The goal is to remove the scab and get the gunk out. Sometimes it's attached to the scab, and sometimes it's not.

On day one, I soaked the foot in Epsom salt for about 20 minutes, and then, while my dad held her for me, I used tweezers to try to remove the scab. No luck. So, I slathered on some drawing salve, bandaged it up, and she slept inside in a dog crate for the night.

If you're not familiar with Jersey Giant chickens, they're large, one of the largest chicken breeds avaialble actually. A standard female averages about 10 pounds, and they're strong. I've held many a chicken and duck in an Epsom salt bath throughout the last year, but this was an entirely different experience. I had to wrap a beach towel around her to get her to stay still, and she practically took up the entire large dog crate, so I didn't want to leave her in there any longer than I had to.

The next day, my dad suggested I use a tool he had instead of the tweezers. I'm not even sure what it was, but it was sharper and pointy, and he claimed he's used it to "cut things that look like that" off of his own body. I didn't want to know anymore of those details, but I decided to give the tool a try. Luckily, I have a ton of medical supplies from all my mom's various health adventures from the last few years, including hospital grade disinfectant for random tools. 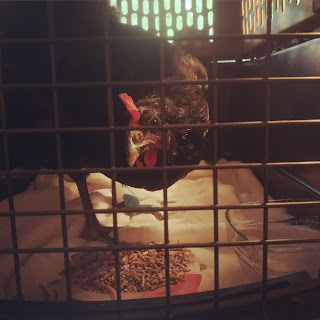 I removed her bandage, soaked her foot again, and I noticed it seemed a lot less swollen. I think the drawing salve definitely helped. My dad held her, and I used the new tool to attempt to cut out the scab. It took me about 10 to 15 minutes, but I managed to get the scab off and remove what looked like a small kernal of corn. Thankfully, it was still attached to the scab, which made life a lot easier. I explored the hole a bit to make sure there was nothing else left inside, and when it began bleeding, I figured she was good to go. Signs of life and healthy skin and all that. I cleaned and disinfected the wound, smothered it in in antibotic cream, packed it with gauze, wrapped it with vet wrap, added extra sports tape for security, and put her back out with the flock. She picked at the bandage a bit, but you could tell she already felt better.

Over the next week, we'd catch her, and my dad would hold her while we checked her foot, cleaned it, and changed the bandage. I must say, I became a pro at bandaging because chickens are nasty little creatures, and that wound stayed so so clean. She regained her confidence almost instantly. Once she got used to the bandage, she was running, jumping, scratching, and doing normal chicken things. It made my heart happy to see her exploring again instead of hovering around the coop on one foot.

A textbook case of bumblefoot takes about a week to 10 days to heal, and yesterday was day eight. I went into the bandage change thinking I would leave it off unless there was still a gaping wound, and sure enough, it felt like it was closed up. Most of the swelling was gone, and her foot no longer felt warm to the touch, so I disinfected it really well and left the bandage off. So far, she's doing okay. She still has a slight limp, but I'm not sure anyone would notice it besides me, and she pecks at the bottom of her foot occasionally, though I'm sure it's sore. But she's putting her full weight on it and still has her confidence about her, and that's what we want. 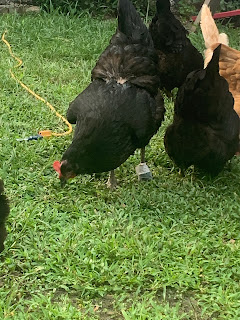 I'm hesitant to say my home bumblefoot treatment was a success just yet. There are times when it's not one and done. As a matter of fact, someone in my Atlanta chicken group just reported that they've been dealing with it for over a year now. It can return. She could just have a permanent limp. It's possible I didn't get it all out — exploratory surgery is not my specialty after all. And, as it turns out, Jersey Giants are actually prone to it because they're so stinkin' big and heavy. There are many variables, but for the moment, I'm feeling good about it and will just monitor her for the next few weeks and intervene if I notice major changes. If she does get worse , we'll start all over. I also have antibiotics should we end up needing them, and if I feel like I've exhausted all I can do, I'll take her to a vet, though that's not necessarily the cure-all some may think it is either.

I guess the lesson here is that I was absolutely terrified of bumblefoot from the moment I first read about it, and up until the moment I was actually treating her, I was literally shaking just thinking about it. But I tackled it, and it wasn't as scary as I thought it'd be. That said, if the rest of my chickens (and ducks) could not get it, at least for a long time, I'd appreciate it.