Today is day 15. I'm halfway to the finish line. Some days I get way too excited about that, and some days I just don't care. I do feel better in general, and I can tell I've dropped a few pounds. And I do have a little more energy. I've also discovered some new recipes and places to shop, which I'll probably stick with for the future. I'm drinking a lot more water. That's the positive.

Once again, I could not eat this way long-term. Maybe 70-80 percent of the time. It's too restrictive, especially when dairy products are concerned. Dairy has never really bothered me, and I find that not eating it is limiting what I'll eat from other food groups. And that's causing me to eat way more carbs than I'm used to. It'd probably be 100 times better if I had my own kitchen and had fridge and pantry space and access time to cook a million things in advance and most of my kitchen stuff wasn't in storage. I could get really creative with meal ideas, and I may do it again one day when I'm back in my own place. I'm not complaining at all — I'm beyond that phase, I think. Just pointing out some realities. All that said, it works best if the conditions are right, but it is doable when they aren't.

But overall, I do still recommend it. My main goal was discipline, and it's taught me that. I'm actually looking forward to trying to find my own way but also staying (mostly) healthy after it is over. I think there are a few cheats I do that aren't exactly Whole30-approved (eating ingredient-compliant potato chips, for example), but I have done the best I can and am pretty darn proud of that. So, here is a quick rundown of the last few days.

Day 12 was a rare day that did not involve leaving the house, and I even had early access to the kitchen. While I'm still not eating lunch every day, I did get to cook early today and the meal of choice was spaghetti...with broccoli slaw. This is actually something I'll eat when I'm not Whole30-ing, and I am in love with this complaint marinara sauce I found in a local farmer's market shop. When I picture the perfect red tomato sauce, this is it. My plan was to put half of it up for the next day, but I ended up eating a second helping later in the night. Could I have enjoyed it more with cheese? Absolutely. But it was pretty darn good.

1) I drove to Marietta and shopped at Sprouts for the first time. Not only did I find Whole30-approved bacon and a few other products that I can't find on a typical Publix run, but I discovered a whole array of products that I would love to have on days 31 and beyond. So, Sprouts will become a regular shopping experience for me. I bought everything from deodorant to organic produce and was amazed that it was not overpriced like some stores that carry similar products.


2) I discovered this amazing recipe for non-parm chicken parm. My mom is still having a reaction to her medication, so I told her I'd cook extra for my dad, too. I had no idea how he would react to chicken lightly breaded in almond flour, but he loved it as much as I did. I roasted some baby broccoli and carrots to go with it, and it's been one of my favorite meals thus far.

3) Part of the reason why that non-parm chicken parm was so good was the quality of the almond flour. I usually buy whatever I can find in the store, but I bought it in bulk at Sprouts earlier in the day, and it made a huge difference. I can see myself making most any breaded chicken I eat in the future with the almond flour. This is a recipe I'll keep eating in the future.

Day 14 was a busy one, and I knew I'd have no time to cook. My mom was nice to enough to cook me up some bacon and eggs before I headed out the door. The bacon was great, but I don't think I can do eggs cooked in ghee anymore. I'm so over the ghee. At first, I really liked it, but it's starting to taste semi-disgusting to me.  I want my grass-fed butter back.

I kind of snacked for lunch, and for supper I made a little summer preview. Seeing as how it was 77 degrees on March 1st, that wasn't much of a stretch. I cooked some compliant hot dogs I found at Sprouts and chopped some onions on them. They were okay, but they needed ketchup in a big way. I also had some watermelon and a handful of potato chips. This is probably not okay on this plan, but I get to a point where it's eat the potato chips cooked in olive oil and with no other ingredients or not eat. Again, I may do this all over when I'm back in my own kitchen and can plan better and cook more, but I'm happy with what I've done so far, and that's all that counts. 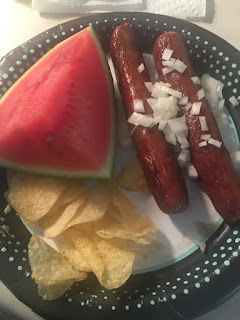 Today, it hit me that I once relied way too much on caffeine and other junk for energy. Like I said, eating three meals a day is kind of difficult for me to work into my schedule. Since I didn't leave the house today, that should have been a bit easier, but when I woke up this morning, nothing I had appealed to me. I'm so over eggs, and I didn't have any leftovers. I finally settled on my go-to banana and a handful of plantain chips. By 4:30 or so, I was dragging. With that in mind, I decided to cook up some chicken tenders to have on hand for breakfast for the next day or two.

Day 15 is also the day I gave into my pizza craving. Sort of. I've been dying for some pizza, and I don't even eat pizza that much. Like some people have it once a week, and I maybe have it once every few months if that. I think it's got something to do with the cheese and dairy cravings that will not go away. Anyway, I ended up making a pizza crust out of egg whites. That may not be "in the spirit of the Whole30," but it was in the spirit of Sarah. I topped it with compliant pizza sauce and chopped up some onions, bacon, and pepperoni (oh yes, I found complaint pepperoni at Publix yesterday). I sprinkled some garlic and oregano on top and placed it in the oven on the broiler setting until it got kind of crisp. It was amazing! I may actually make another one — or two (they are small) — tomorrow. It's even good for low-carb eating, so it's definitely something I want to keep in my
cooking repertoire. Because I felt like I needed more veggies, I chopped up some sweet potatoes to go with it. My mom introduced me to the mandolin, which shaved hours off my sweet potato chopping time. Who knew?

I don't have much else to add. I'm still craving milk like crazy, but some of the other cravings have died down a bit. That could have something to do with my mental resolve to just power through the next two weeks. My plan is to stay busy and try some new recipes, all while keeping it simple. I'm also hoping to add a daily workout back to my schedule for the second half. I think that will be important for the transition back into not nitpicking my every meal to death.
Posted by Sarah at 23:32