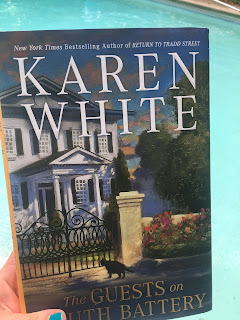 When I resurrected my blog this year, I wanted to write about books, authors, reading, and writing — in addition to my life — but I've had a hard time even sitting down to write anything that's not work-related lately. While I'm still working on my 2017 reading challenge, I'm also still way behind, so that's out.

That said, I was just upstairs doing some cleaning, and I have a bookcase that houses all the books I've read over the last three years. Looking over the titles made me a bit nostalgic for some of my favorites, so I thought I'd take some time to write about a few of them. Not surprisingly, many of them fall into the category of Southern fiction, and most of them are perfect for curling up with on a warm sandy beach or by the pool or on the back porch or...you get the idea.

So, if you're in the market for some fun (and some dark) Southern fiction to lose yourself in this summer, these are some of the books (and authors/series) I'm digging lately.

If you know me, you know I'm a sucker for anything about Charleston, and these books put me right smack dab in the middle of the city. As a matter of fact, I read through most of the series last summer when my mom and my dog were both really sick, and I needed an escape. I can visualize every place Melanie, a real estate agent who just happens to see dead people, and her family and friends visit as if I am there myself.

One thing I love most about this series, aside from the setting, is that the supernatural stuff is not silly or over-the-top. Having grown up in an old house filled with strange phenomena myself, my standards for ghostly things are high. I just finished up the last book in the series, and at this point, I feel like the characters are old friends.

I recommend reading these books in order, starting with The House on Tradd Street. I also recommend following the author, Karen White, on social media. She's delightful! As a matter of fact, she has several standalone books, and I haven't read as many of those as I'd like to just yet, but I have a few in my own summer reading pile.


2. Almost anything by Mary Kay Andrews

Mary Kay Andrews is the quintessential Southern beach read, if you ask me. Her books and characters are fun, and most of them take place along the coasts of Georgia, Florida, or the Carolinas. As a matter of fact, her new releases typically coincide with my annual family beach trips, so I almost always find myself parked at Tom Petty's pool with an MKA hardcover in my hands.

That said, I do love some of them better than others, but I'd also say you can't go wrong with whatever one you choose.  My absolute favorite is Savannah Blues, which also has a couple of sequels. Hissy Fit is another favorite; it takes place in Madison, Georgia. I just realized my other favorite, Fixer Upper, also takes place in Georgia. I'd love to see some of her future novels return to the Peach State, because she does Georgia so well.


3. The Cypress House by Michael Koryta

This may not be your typical beach read, but I read it at the beach, so it's making the list. Idgie at Dew on the Kudzu recommended it when I told her I needed some Southern Goth in my life, and when she recommends, I listen. The book takes place in Florida, mostly at an old boarding house on a marsh island during a hurricane. The protagonist is kind of a dark guy, and he has some psychic abilities that help set everything in motion. It's not your typical fun, girly beach read, but I couldn't put it down. Sadly, I haven't yet read more of Michael Koryta's books, but I do have them on my to-read list.


4. The River Witch by Kimberly Brock

This book is not just one of my favorites from the last couple of years; it's one of my favorites things I've ever read. Something about the setting, the characters, the plot — it was all just so hauntingly beautiful and tragic. I don't often re-read books, but I could see myself getting into this one again. It's about a young woman who has gone through some rough stuff, so she retreats to a mostly secluded island off the coast of Georgia. She meets a unique 10-year-old girl who "brings alligators, pumpkins and hoodoo" into her life and the girl's family. I can't say enough good things about this one, and I can't wait to see what else Kimberly Brock has for us in the future.

I purchased this one on a whim when I saw in a magazine that it won some sort of Florida book award...and that it takes place just outside of St. Augustine, a city where my family has vacationed for years. It sat on my to-read pile for a long time before I decided to finally give it a try. Part of me thought I'd end up getting rid of it after a chapter or two, because I feel like the summary on the back does not do it justice. I couldn't have been more wrong. Like The River Witch, this is one of those books that is probably one of my all-time favorites, not just a favorite from the last few years. It follows the members of a deeply flawed family who has lived and owned a restaurant in a little North Florida town for years. I'll be honest — I don't remember all the details of the plot, but I do remember thinking about the characters long after I put the book down and not wanting it to end.


6. At the End of the Road by Grant Jerkins

This is definitely not a beach read. I'd file it more into the Southern Gothic category, but I loved every minute of it. Part of that could have to do with the fact that it takes place in my hometown. I don't think I've ever read a book that so much as mentions the city where I grew up, so I could picture exactly where everything took place. As a matter of fact, every time I go through that area, I think of that book now. It tells the story of a 10-year-old boy in the summer of 1976 and a series of off-the-wall events that will change his life. There is some heartbreaking stuff in the plot that some may find difficult to read, but it's one of those you can't put down without knowing how it ends.

I picked up Bound South, Susan Rebecca White's first novel, at a garage sale a few years ago, and I couldn't believe how much I loved it. Most of it takes place in Atlanta and its suburbs, so you know that was a big selling point for me. Seriously, set a book in the Atlanta area, and I'm instantly hooked. White's knowledge and detailed descriptions of the city were just as enjoyable to me as the plot. As a matter of fact, I made my dad, who grew up in town, read it, and he also loved it, so don't let the girly cover or the women's fiction label fool you. It's a must if you love books based in Atlanta as much as I do. While that one is my favorite, I suggest following it up with the author's second and third novels, both great reads in their own right.

8. Anything by Joshilyn Jackson

To be honest, I haven't read all of Joshilyn Jackson's work, but she's another author who will always be in my to-read pile as long a she is writing.  My favorite so far is Gods in Alabama, which has a little bit of everything — small Southern towns, big city life, murder, religion, and race — but don't let any of that scare you. I recently read another one of her books which I'll talk about on a future post, so I'm not going to say too much here. Just put her on your list; you won't regret it.


This is one of those books that always popped up in my recommendations on Amazon, and I always saw people reading it when it debuted, but I never bothered to buy it myself until I saw it at a garage sale. Ironically, that seems to be where I find the best books. I fell instantly and madly in love with the main characters, the Savannah setting, and the relationships formed in the story. A little girl's mother dies, and she goes off to live with an older relative in Savannah. It's easy to dismiss it as a Hollywood cliche story, but there's so much more to it than that. If you love a book that makes you laugh at one point and cry your eyes out in the next chapter, this one's for you.

To be honest, I purchased this book because it sounded similar to some of the stuff I've written, and I wanted to see that there were other people out there who wrote and enjoyed the same kinds of stories I do. When my uncle died a couple of summers ago, I also needed something kind of light and fun, so I pulled it out of the to-read pile. It lived up to those expectations and then some. Kilpatrick's books are quirky - not too sweet and not too sassy - and 100 percent Southern. I promise, if that's your thing, you'll devour them.
Posted by Sarah at 20:08