On a Queen and a Dog 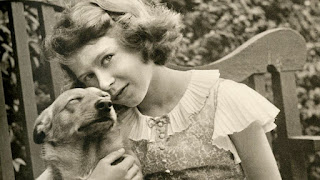 On September 8, I woke up to a text from my friend, Chris, that asked me if I'd heard the news about Queen Elizabeth's health. I had not, but I didn't think much of it. She was in her 90s, and there has been talk of her health for a few years now. But once I got rolling and saw headlines with phrases like "keeping her comfortable" and "family has been called," I knew the end was near. I was glued to the BBC for a while, but eventually, I had to go outside and get the animals fed, plus I had errands to run, so I asked Chris to text me if there were any further developments. Not 20 minutes later, he let me know that she had died.

Honestly, I wanted to spend the rest of the day glued to my TV, but my poor sweet dog, Sadie, had been dealing with some health issues, and I needed to go pick up some things for her. I tried to do it as quickly as possible, and when I got home, I was ready to throw Sadie into the bathtub and then settle myself back in front of the BBC for more coverage of the queen's death, but that didn't go as planned.

First, Sadie didn't get up to greet me when I got home. She was on her bed in the living room, and she cried like she wanted to but couldn't. I didn't think much of it. At almost 13 years old, she's no spring chicken herself and can be a bit lazy these days. But it was getting kind of late, and I wanted to get the bath done, so I ended up making her get up and watching her hobble pitifully to the bathroom. Something was definitely wrong. We went ahead with the bath, and afterwards, I inspected her back leg that was causing her problems. I trimmed her nails. Checked for something stuck in her foot. Did all the things you do when your dog is suddenly limping. My dad had taken her out just before I got home and said she was fine when she came inside, so something didn't add up.

That night, I was a wreck. In the last month or so, she'd already had about 1,000 other issues pop up. Most were not serious and easily treated at home, but Anxiety Sarah kicked in, and I decided that because all of these issues had happened at once, she was on her death bed. I was determined she couldn't walk because she was eaten up with cancer or something. What you have to understand, though, is that I'm 0 for 2 on this stuff lately. The last two members of my little family who I carted off to the hospital — my mom and my cat, Lily — never made it back home even though they went in for what I thought was something routine. I wasn't ready for a third, especially not this one. I'd already planned a vet appointment for Sadie for October, but I was going to have to move that up a few weeks, and I was terrified of what he would tell me when we got there.

So, what does this have to do with Queen Elizabeth's death? And why does an American girl who grew up on the idea that we have no need for kings and queens even care? First, I guess I should confess that I'm a little obsessed with the Royal Family, and I have been since I was a kid. From the pagentry to the lineage, I am here for every single second of it. I don't know how or why I started. My dad said my grandmother was really into Queen Elizabeth, which I don't really remember, but they're about the same age, so that would make sense, and she did remind me of my grandmother a bit. There's also the fact that Elizabeth is my middle name, and I remember finding that I shared a name with a queen and the Duchess of York pretty cool when I was a kid. Eventually, I developed a major crush on Prince William and at one point, I'm pretty sure my single goal in life was to grow up and marry him. Even in seventh or eighth grade, I remember doing this huge research project on the line between Henry VIII and Queen Elizbaeth II, and I spent so much time on it and stayed up so late working that I was forced to put an end to it. In more recent years, I sat up and watched with envy and geunine excitement as Meghan married Harry and disdain as she appeared to take many of our little girl dreams and throw them out the window. I watched The Crown on Netflix with the intensity of Peyton Manning watching football film, and I think I've seen almost every show, movie, and documentary on the queen and her family that exists. When my grandmother died, my grandfather gifted me with her copy of My Story by Sarah Ferguson, and it's now one in a collection of royal-related books and magazines I own.

But above all of that, I found Queen Elizabeth to be a remarkable woman, and I realize this isn't a unqiue thought. I mean, name one other person in this world whose death could bring so many people together to find common ground as it has over the last week. My aforementioned friend, Chris, referred to her as the "world's grandmother," and it does sort of feel like that, like the world lost its grandmother. When I think back over the trying times we've had over the last few years, her words were always the ones that brought me comfort, not my own president or some other world leader. To lose that calming, stable voice in what feels like a chaotic time to be alive is a major blow.

So many people have said so much about Queen Elizabeth this week that I'm at a loss as to what I can add. On a personal level, she's someone I'll always want to emulate. Like my late grandmother and her sisters and many other women of that generation, I often find myself wondering what she would do in a situation. And how can you not look up to someone who was so dedicated. She was dedicated to service, her faith, her country, her job, her family, her heritage, to doing the right thing, to her horses, and to her dogs. Her dogs. Truth be told, her love for her dogs is another reason I've always felt a little bond with the queen. 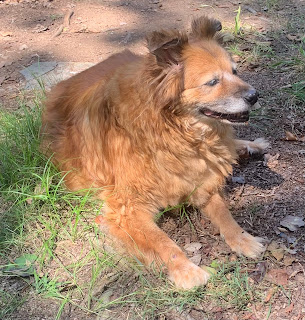 And that brings me back to Sadie. I was able to get an appointment with my vet for the next Friday, and I hated to wait that long, but I also wanted to see a vet I know and trust as I've had some not so great experiences. And in the meantime, I was a wreck. My dad and I had to work together to get her outside to the bathroom, and I spent every night sleeping on the sofa with her in the floor next to me because I knew she couldn't go upstairs where we normally sleep. And I was just practically paralyzed with fear for eight days. Thankfully, I have a big work project going on that I really enjoy and can work on it 24/7 if I want, so I tried to focus on that, plus football season started, which is always a great distraction. But when I wasn't watching football, I was tuned into the BBC or this documentary about Queen Elizabeth or that one. Or reading about her online. It was the comfort and distraction I needed to make it through that week.

On Friday afternoon, I managed to get Sadie in and out of the car and to her appointment. I was literally shaking. My dad was a mess too. I think I'd convinced him she wouldn't be coming back home with me. Even the vet's assistant had to talk me down from that idea. I told her about my mom and Lily, and she said, "I hope you don't think she's in that kind of shape right now?" I felt a little better. Anyway, long story short, Sadie came back home. She came back home with a torn ACL, which wasn't exactly what I was hoping for, but it was a far cry from what I had conjured up in my head. We do face that problem that it may need surgery to heal, and she's really a little old for the surgery, but we're going to see if we can get her healed without it before we make any crazy decisions. It may be a long road. And it may be that our days of taking walks and sleeping upstairs are over, but I'll adjust to that as needed. In her lifetime, she's looked after my other dogs as they've gotten older. Saved my other animals from predators. Looked after my mom. Kept me company on my worst days. She's given me so much over the last 13 years. She's the most selfless dog I've ever had, and I wouldn't dream of not doing my best for her in return.

I'd like to think Queen Elizabeth did the same for her dogs in her own way. But either way, I'll alawys look back on this week, and it will serve as a reminder to dedicate my life to the things that are important, to try to live a life like the Queen did. That might mean serving the world. That might mean serving my dog when she's down, but we all have a role to play, no matter how big or small.