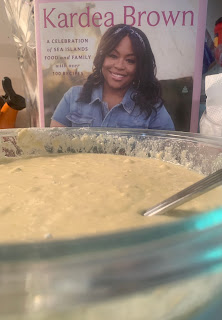 During her last few years, my mom used to come home from dialysis and watch the Food Network most days. On one particular occasion, I remember her telling me that she had recorded a show for me to watch. I don't like to cook like she does, so my interest in cooking shows wasn't very strong, but she insisted I'd just love this show. "The lady is from Charleston! You would love her! You'd love the scenery! And the food she cooks — it's the kind of food we actually eat," my mom insisted.

If you know me, you know that Charleston is like a second home to me. I love the lowcountry of South Carolina and Georgia, and I have always been fascinated with the Gullah Geechee culture, particularly when it comes to food and the origins of their dishes. I've even got a writing project in the works related to it if I can ever get around to finishing it.

So, on that day, I sat and watched Delicious Miss Brown with my mom, and I've been hooked ever since. As a matter of fact, we'd watch the show together almost every weekend after that, and sometimes, we'd even watch reruns when there were no new episodes. That became our thing. We both fell in love with the host Kardea Brown and her food.

There are many Food Network shows that cook foods I wouldn't eat. This is not those shows. Kardea Brown cooks like I cook, or, at least, how I wish I could cook. She cooks like my mom cooked. She cooks real Southern food, the stuff I grew up eating, which is not surprising considering she learned to cook from ther own Southern mother and grandmother. I love that she's keeping these traditions alive. 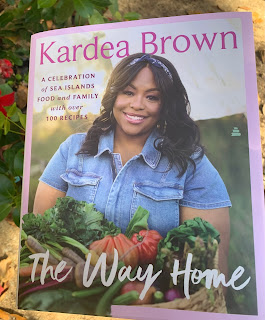 Of course, my mom died last year, but keeping up with Delicious Miss Brown and Kardea Brown's career was a huge source of comfort for me after that. And I was absoltely thrilled when her new cookbook The Way Home: A Celebration of Sea Islands Food and Family came out last month. When it arrived, I devoured every recipe, every picture, every story. Unfortunately, I was also on a specific diet, so I couldn't really test any of the recipes out just yet. Go figure.

So, fast forward a month to Thanksgiving. Actually, fast forward to a couple of weeks before Thanksgiving. I was sitting around feeling sorry for myself because I didn't really have any plans for the holiday, but suddenly, I decided I'd just create my own plans. I decided I'd make a big elaborate meal with turkey, dressing, sweet potatoes, green beans, corn, mac and cheese — the whole nine. My own version of my childhood family Thanksgiving meals.

While last year was technically my first Thanksgiving without my mom, this year has been a little tougher. I think I was still in shock last year. And as I got closer to today, my menu and my determination dwindled. This seemed like a lot of trouble, and that seemed like it was too time-consuming, and my dad won't eat that and I don't need a whole casserole dish of it, and I'll just save the dessert for Christmas, and my oven is messed up again, and the kitchen is a mess becuase I've been cleaning stuff out, and Sadie had to go to the vet, and I had the flu last week, and then a lucrative yet time-consuming project crossed my desk at work, and well, long story slightly shorter, I decided I would just make a turkey breast, mac and cheese, and dressing, and I was really only doing that because I know my dad wanted a little something Thanksgiving-y.

I need to start by saying my mom made the best dressing most people who tasted it had ever had. It was pretty legendary. Nothing else compares. I even joked while she was on her deathbed about how we'd miss it. Her last Thanksgiving on this earth she was too weak to cook it herself, so we made it together. Boy, I wish I'd written that down. Not that you can write it down exactly. A little of this here and a little of that there and let's add some more of that and who needs a measuring cup? You kind of just have to feel it out. I had most of it floating around in my head. Last year, I tried to replicate it and did an okay job. This year, I was determined to do the same. There was only one problem.

I couldn't remember how to make the kind of cornbread she made to put into the dressing. And once I got to thinking about it, I'd only helped her make mac and cheese once, and I couldn't for the life of me tell you how she did it. None of the recipes I found online seemed comparable.

And that's where Kardea Brown came in and saved my Thanksgiving.

I wanted to start writing book reviews here, and I figured her cookbook was a great one to start with. A few nights ago, I was skimming through it again, taking notes for my review, when I realized she had a cornbread recipe that sounded just like the one my mom made. And not only that, but her mac and cheese sounded a lot like what my mom made too.

As I said before, we fell in love with Miss Brown and her show for a multitude of reasons, but the fact that she cooked like we cooked/ate was the biggest one. 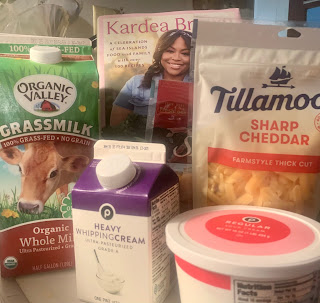 So, I got up this morning, and I put my turkey breast in the slow cooker. And then I went to work making Kardea Brown's cornbread, which I then turned into a version of my mom's dressing. And then I whipped up a batch of her macaroni and cheese. There were a few mishaps because when I cook, there are always mishaps, but dare I say, the meal was pretty darn good, especially considering I had to cook it all in the toaster oven in the same dish because it's the only one that fit. And I didn't have enough pasta for the mac and cheese. And I didn't have the right corn meal for the cornbread. Even my dad said "that macaroni and cheese isn't half bad." That's a high compliment coming from the man who told me some chicken I made a few months ago "smelled like heartburn."

Anyway, I can't wait to dive in and try more of Miss Brown's recipes. I'm especially hoping to give that butter pecan pie cheesekcake with brown butter sauce a try around Christmastime. Or better yet, if someone wants to make it for me, I'll pay you. Really, I will. I've cooked enough today to satisfy that urge for a while. But I managed to pull off a semi-decent Thanksgiving with the help of Kardea Brown.

I felt like she and my mom were both in that kitchen with me today. And while I'll never make a recipe exactly like my mom did, I think these cornbread and mac and cheese recipes will be my new go-tos. And who knows? Maybe one day, I'll be cooking them for my own family.

If you're reading this, Happy Thanksgiving, and go buy Kardea Brown's cookbook! And now, I'm gonna have seconds of this mac and cheese while I'm allowed carbs...it's that good, y'all! 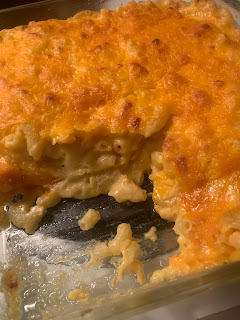