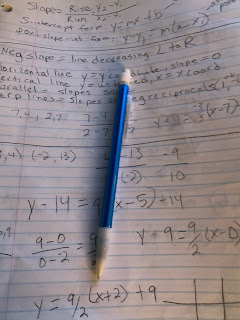 School started last Monday — I'm nearing the end of my second week — and I have to be honest, I kind of love it. I just wish there was a little bit more time during the day.

I'm taking a class about the history of landscape, as well as a marine science course. The third one I'm taking is the one that I was the most excited for — it's about the role landscapes play in literature, films, and art. Thankfully, those three courses are pretty laid back so far.

Because my fourth class, precalculus, is not.

Up until now, the classes I've taken during my Great Return to School have been fairly easy for me. This one isn't going to be like that. It's not so much that I'm bad at math. It's just that I hate doing math. But silly me chose a slightly difficult science major at a school known for its rigorous math and science programs, and precalc is a prerequisite for some of the upper level science courses I have to take. And while I knew it would be difficult, I didn't know it would be so demanding. I have to attend three classes a week. No excuses. Homework is due three times a week. I got a bit behind at first because when the professor said "you can skip the first chapter in the book; it's just algebra review," I realized I needed to not skip that first chapter because it's been a little while since I took algebra. Though I did well in it, so there's that.

Anyway, I think I'm slowly but surely getting the hang of it. Last Friday, I spent seven whole hours on it. Tuesday, I spent about four on it, and last night, I spent about three and a half hours working on a homework set that was due at midnight. So, that's progress, right? And it may not have taken that long last night except there was one problem that I just did not know what to do with it. I almost just submitted it incomplete, but I wasn't ready to give up just yet, even though I was exhausted. I'd been going for about 14 hours straight yesterday, and it was 11 p.m., and I just wanted to take a bubble bath and go to bed.

Thankfully, unlike my previous college experiences, we live in a world of Google and YouTube, and after realizing I was not going to find the answer in my head or my textbook or my class notes, I searched the Internet. Eventually, I found this amazing high school teacher who makes YouTube videos about math problems. In one, he did sort of a smaller, easier version of the problem I had, but I was able to take his advice and plug it into my situation.

And after about 45 minutes, I had the right answer. I couldn't believe it. I double-checked my work. I liked the video and gave the dude an appreciative comment. I ran around my living room squealing like a maniac.

What I did not do is look at the clock. I sat back down to fill in my answers and digitally submit the homework. I was so darn proud of myself. But I was met with a message that essentially said "This can't be submitted." What? Oh yeah, it's midnight. The homework deadline is 11:59 p.m. I guess it's sort of like the football player who is penalized for excessive celebrations. I got so cocky that even though I had the right answer, I still missed it and ended up with a B on my homework and an incomplete for that problem. One minute. Go figure. But whatever, I got the right answer.

I hate hate hate when people tell me I have too much on my plate, but realistically, I probably should have stuck to two classes this semester while I took precalculus. It is fast-paced and demanding of my time, energy, and brain cells. But I'm not going to back down now. I'm just gonna have to work a little harder and a little smarter and sleep a little less maybe.

Throughout my previous kindergarten through some college school career, taking the lazy way out was my thing. It worked for me. I didn't have to try too hard to get myself into the colleges I wanted or to pass my classes or to do well on the SAT. Hell, not to brag, but I got into Duke without even trying. They literally came to me. School was boring. I had better things to do.

When I went to my freshman orientation at the University of Georgia many years ago, I absolutely fell in love with the school, the campus, the people, and the city of Athens. I knew I'd found my place. But I know now I just wasn't meant to be there at that time for a variety of reasons. From the day I packed up my Jeep and moved to Atlanta to screw around at Georgia State and study acting, I've felt UGA calling me back as I worked through those other reasons, but the timing was just never right. I guess it is now. At least, it feels that way.

It's just a whole new ballgame. I crave knowledge. I want to read textbooks and write essays and take tests and do projects (well, not group projects — some things never change). I want to do well. I want to make As in my classes. I want to get a degree that I have absolutely no use for. Maybe it's maturity. Maybe everyone should take 20 gap years? I don't know what's changed, but I'm excited to see how long it lasts and where it might take me.

I just have to get through precalculus first.