On Football Highs and Lows

My 2023 is off to a pretty decent start. I'm currently on a hiatus from work to focus on some personal writing projects, which means I haven't been stuck to my laptop 12+ hours a day. And it feels great. I'm working out. Cleaning out my mom's stuff again. Working on the old house a little bit. I'm actually sore from boxing, weight-lifting, and clearing some small trees off my property yesterday, and that feels so good. School starts back in about six days. I've been spending time with my animal pals. I'm reading daily. Just booked a fun trip for March.

And literally, during the first seconds of 2023, I experienced what was easily one of the most exciting moments in my life as a football fan. My beloved Georgia Bulldogs played Ohio State in the Peach Bowl on New Year's Eve, and it was not the smooth sailing we've grown accustomed to this season in Georgia. The game was oh so close, and by the last minute of the fourth quarter, I figured we'd blown it. Ohio State just needed a field goal, and CJ Stroud is damn good. There was no doubt he would get the Buckeyes there, and that would be the end of the ballgame.

I resigned myself to the fact that we just wouldn't make it to the championship game this year. I couldn't even bring myself to watch the last few plays. No sense in rubbing salt in the wound. With my hands over my eyes, the clock struck midnight, and Ohio State's kicker, Noah Ruggles, lined up to make those three game-winning points. Only he didn't.

My dad was sitting across the room, and he began yelling, and my dog danced around, and I was screaming, "What happened? What happened?" with my hands still over my eyes. Of course, we all know now that he missed by a mile, and Georgia got the win. As a fan, it was exciting. I was happy for Stetson Bennett. I was thrilled for the whole team, the coaches, the school, and the state of Georgia. It was the highest of highs for some of us football fans.

And just a couple of days later, the sport would experience one of the lowest of lows. Buffalo vs. Cincinnati. One of the biggest match-ups of the week. Of the year maybe. Two great teams going head-to-head. Two of the hottest quarterbacks in the NFL right now. Playoff implications. It was a game that it would be hard not to get excited about if you're a football fan.

I was pretty busy yesterday, and by the time last night's Monday Night Football game started, I decided to spend the rest of the evening chilling on the sofa, watching the game and reading. I was cleaning up a few things I'd been working on during the first quarter when I saw that someone was hurt. I didn't think much of it at first, and I wasn't really watching what was going on in those moments, but I could hear it in Troy Aikman and Joe Buck's voices, and by the second or third commercial break, I realized something was terribly wrong. And then I saw how upset those men on both teams were, and I realized this wasn't your typical sports injury.

By now, you've probably heard that Damar Hamlin, a safety for Buffalo, went into cardiac arrest during the game, and medical staff had to perform CPR for several minutes to bring him back. As I write this, he's in critical condition in a hospital in Cincinnati. I can't speak to the situation beyond that, but I can tell you what I witnessed last night.

Like everyone else, I wanted more info on what was going on than ESPN was able to provide (though I will say, I thought the analysts and announcers handled it all really well), so I went to Twitter. People like to knock social media, but Twitter is and always has been a great tool for news if you know how to do it right. Aside from a statement put out by someone on Hamlin's PR team, there really wasn't much of an update, but what I did see made me feel a little better about people in general.

With the exception of a few assholes, everyone was praying and hoping for the best for this guy. I saw it on Twitter. I saw it on other social media. I saw it in my texts and messages as friends started contacting me to talk about it. I saw it on TV as the coaches consoled their players, the players didn't hold back their emotions, and the reporters and analysts' voices cracked as they attempted to talk about something that no one ever thought we'd see on a football field. 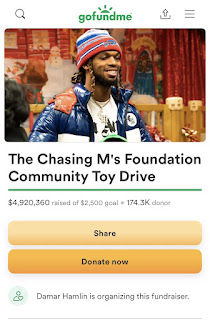 Hamlin, who is just 24, also had a fundraiser set up to raise money for a toy drive he was doing for kids in his hometown. His goal had been $2,500. As I type this, it's at around $5 million.

I've been a football fan for as long as I can remember. It's not lost on me that these guys choose to play a brutal game for my entertainment. And one of my biggest pet peeves is the negativity that surrounds the sport. Some of the media and non-fans especially like to focus on the bad things that happen. I won't get into that right now, but there is also so much good involved in football, in the football community, and in sports in general. Much of the time, the bad drowns it out. I don't foresee that changing, but I always try to do what I can to focus on the good stuff, and I hope others do too. It doesn't hurt to be a decent person.

Anyway, I've got some more ideas about that, but right now, the most important thing is Hamlin's life, and praying for him to pull through and praying for comfort for his loved ones, teammates, and coaches. I know I couldn't sleep last night after witnessing the incident from my living room, so I can only imagine how they feel.